Realm of the Robots 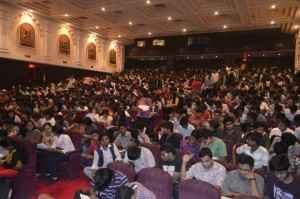 As we kick-start our journey towards the annual extravaganza Robotix held during Kshitij at IIT Kharagpur, the first landmark to be reached was the Annual Kolkata Workshop. Held at G.D Birla Sabhaghar in association with Kshitij and witnessed by over 800 students, the workshop was a grand success.This is not only due to the efforts of Technology Robotix Society but more so because of the enthusiasm of the students which transformed the workshop completely.

We demonstrated 4 working robots which left the audience inspired and amazed.The first robot was a line following autonomous robot made without using a microcontroller, the traditional device for the same.This was followed by the demonstration of a light following autonomous robot. The students were fascinated to see how a robot could sense and follow the light and turn the light source off. The robot which sensed vibrations was a novel phenomenon and was also highly appreciated. At the end we exhibited a robot which used image processing to navigate an arena with signs and directions for traversal.

We also conducted a 2-hour interactive learning session in which we gave a comprehensive introduction to the fundamentals of autonomous robotics and image processing. All these things were presented in a simplified and intuitive manner so as to generate confidence among the young learners present there. We then went on to explain about the events that will be conducted in Robotix 14. The umpteen number of queries and their interest bore testimony to how excited they were to make robots for these events.

The exhausting preparations and the huge amount of time and effort that we had put in to the Kolkata workshop has not depleted our reserves of energy as we come close to the Annual Winter Workshop at IIT Kharagpur. Every year the Winter Workshop, organised exclusively for the students of IIT Kharagpur, witnesses a large number of enthusiastic students who are divided into groups and guided by a mentor. Each of these groups is given a problem statement in autonomous robotics for which they need to make robot within a week. There are separate groups for image processing as well. Our workshops are regarded to be of very high standards and lay a strong foundation in robotics.

Students at IIT Kharagpur interested in attending the workshop are requested to look out for announcements at www.robotix.in

Meanwhile, registration for our events at Robotix to be held during Kshitij 2014 have begun! Register for the events you plan to participate in at http://www.ktj.in